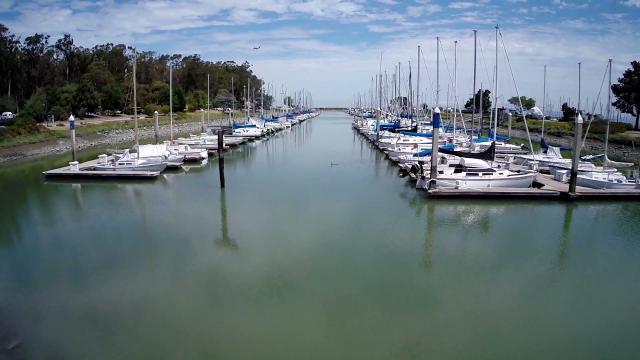 One of the largest suburbs on the San Francisco peninsula, San Mateo is a bustling metropolitan bayside community. It not only holds the district’s name (San Mateo County), but is surrounded by a couple other well-populated cities. Its most notables of which are Foster City to the east, Burlingame to the north and Belmont to the south. The racial makeup here is somewhat diverse. Half of the 92,000 people that live within the city’s limits are of white descent, while hispanic and asian heritages split the rest.

San Mateo has a large residential community. For perspective residents, the city offers a wide range of middle-class homes across a rather flat neighborhood. Homes are mostly plotted on narrow lots with shallow front yards. Moreover, streets are arranged in a grid-like formation, embracing a kind of congested feel. If you’re looking for nicer homes, check out Baywood Aragon neighborhood. Its orderly streets and elegant two-story homes are your best bet in the city. For the typical resident, median household incomes are tabbed at $80,000/year. Moreover, the average house here will run you around $700,000, while rents can range anywhere from $1,200 to $1,750 a month. And with crime relatively low across the city, new families have no problem fitting in here.

The city’s shopping quarters are some of the best along the San Francisco peninsula. If you stroll towards the Bridgepoint and Hillsdale Shopping Centers, you’ll find everything from chain restaurants, to grocery stores and from little neighborhood boutiques to enormous department stores. Elsewhere, the San Mateo Medical Center serves the city’s hospital needs. It’s a rather small center, but sits conveniently between 37th and 39th street (just off of El Camino Real).

San Mateo Union High School District overlooks three high schools, San Mateo, Hillsdale and Aragon. For higher education, the city only holds the College of San Mateo (community college), mostly accommodating local residents. For travelers, the San Francisco International Airport is just a mile up US Route 101. The most interesting note about San Mateo is that its located about halfway between San Francisco and San Jose. This gives residents a much convenient option to choose between two popular job hubs.
Pros
Cons
Recommended for
Add a comment...
The opinions expressed within this review are those of the individual reviewer and not those of StreetAdvisor. Report
San Mateo
NikkiDKatt
4/5 rating details
2yrs+

San Mateo is a pretty big city (almost 100,000 residents) along the peninsula. It is roughly positioned between SF and Silicon Valley (closer to Silicon Valley) which makes it a perfect location for couples who have jobs in both. It is hard to give a summary of all of San Mateo since there are so many individual neighborhoods in it, but you can roughly say about it what you can say about Redwood City, which is that it tends to be more expensive/swankier on the western end than on the eastern.

Also you can’t really call San Mateo a suburban bedroom community, since it has its own commercial sector (including the headquarters for Franklin Templeton and a couple of dozen other companies) and since many people commute into it for work as well. There is a lovely downtown area with cute stores and attractive older buildings.

Although SF is not that far away, you will not have to leave San Mateo for restaurants and nightlife. From Brazilian bbq’s like Espetus to high end joints like 231 Ellsworth, you will certainly find a number of choices from across the world right in town. And singles will be happy to know that lounges and bars like the Downtown Tiki Lounge and the Yuppie Bar abound in the area as well. You can also catch live music at B Street and Vine, or you can hit the dance floor at Level 236.

There are also, of course, movie theaters and all the usual suspects when it comes to entertainment.

This is a relatively safe area as well, with an overall crime rate that is lower than the national average and barely averaging one murder per year.

It also has great schools, nice parks and quiet neighborhoods for family living. Overall, a really great spot. Of course, you will need to do fairly well for yourself to afford it, but that virtually goes without saying in the Peninsula.
Pros
Cons
Recommended for
Add a comment...
The opinions expressed within this review are those of the individual reviewer and not those of StreetAdvisor. Report
San Mateo
Tracypie
4/5 rating details
2yrs+

"Great little city on the peninsula!"

I lived in San Mateo for 15 months and it was great then, but now it's even better. In the past few years the downtown has burst with new businesses. There's a movie theater - right near the train station, new restaurants and cafes, plus a lot more spas and salons. It's becoming almost as upscale as Burlingame. It's also super easy to get around and walk to things.

Everything that is worth seeing is located between 2nd and 5th avenues from El Camino until about one block South of B Street (toward 101 freeway).

They even have a wine festival where local merchants participate and you go from place to place and sample wine and food. A festive family event.
Pros
Cons
Recommended for
Add a comment...
The opinions expressed within this review are those of the individual reviewer and not those of StreetAdvisor. Report